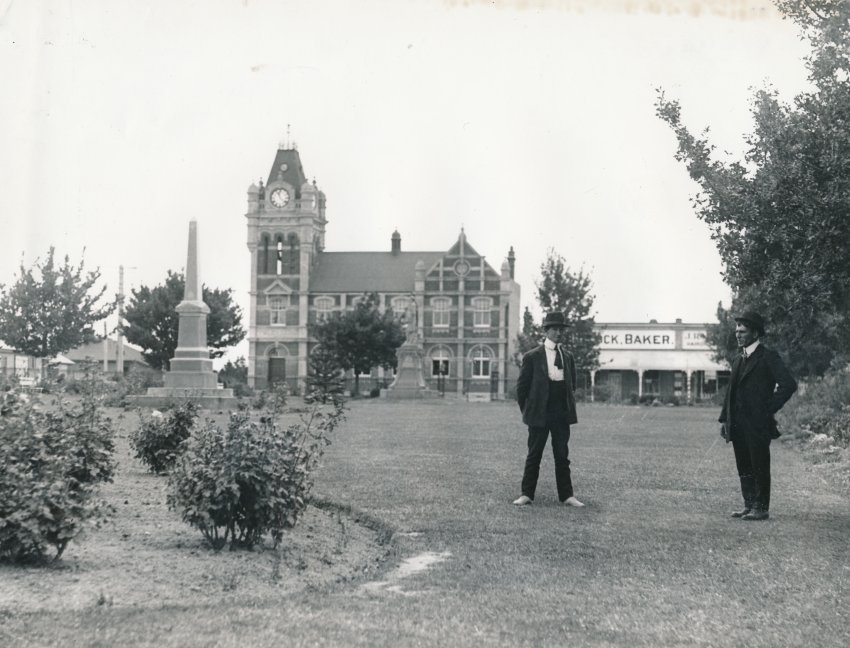 Our iconic clock tower which stands tall in Baring Square East is widely recognised as the symbol of Ashburton.

The town clock began ticking in 1904 when it was installed in Ashburton's post office clock tower by its maker Wilson Littlejohn. Following the 1931 Hawkes Bay earthquake and the 1942 Wairarapa earthquake, the tower was removed as ordered by central government. The clock was put into storage.

The clock was eventually given a new lease on life and was restored in the 1970s by the Ashburton Lions Club. The club came together in Ralph Crum's home workshop to work on the clock every Monday night for a whole year, and the results speak for themselves. The tower itself was designed by Warren and Mahoney Architects and built by Bradford Construction Ltd. The clock was installed by Horrell Engineering. The clock tower was just one aspect of a larger redevelopment project which transformed Baring Square East entirely. It was also a gift, from the Ashburton County Council to the Ashburton Borough Council to mark 100 years of local government.

The Ashburton clock tower won a NZIA Local Award in 1978, and later in 2004 the New Zealand Institute of Architects acknowledged the significance of the structure and presented Warren and Mahoney with an enduring architecture award. 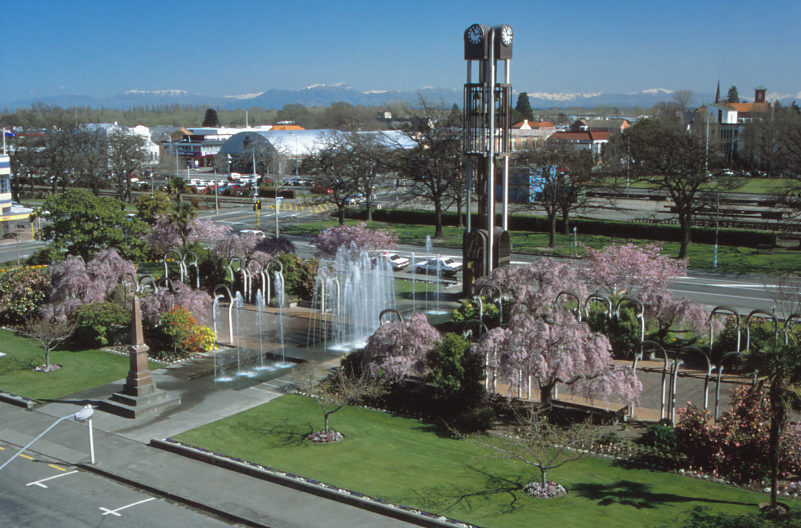 Havelock Street as told by a poet

The businesses and characters of Havelock Street were the subject of a playful and jaunty poem which was written around 1915 by a man who styled himself 'Sinbad Mark Two'. His real name was Thomas Bowyer, and he even had another nickname: 'Unkle Tom'. This man with many names wrote the poem 'The Scroll of Fame: An Havelock Street Zig Zag' which you can view here: 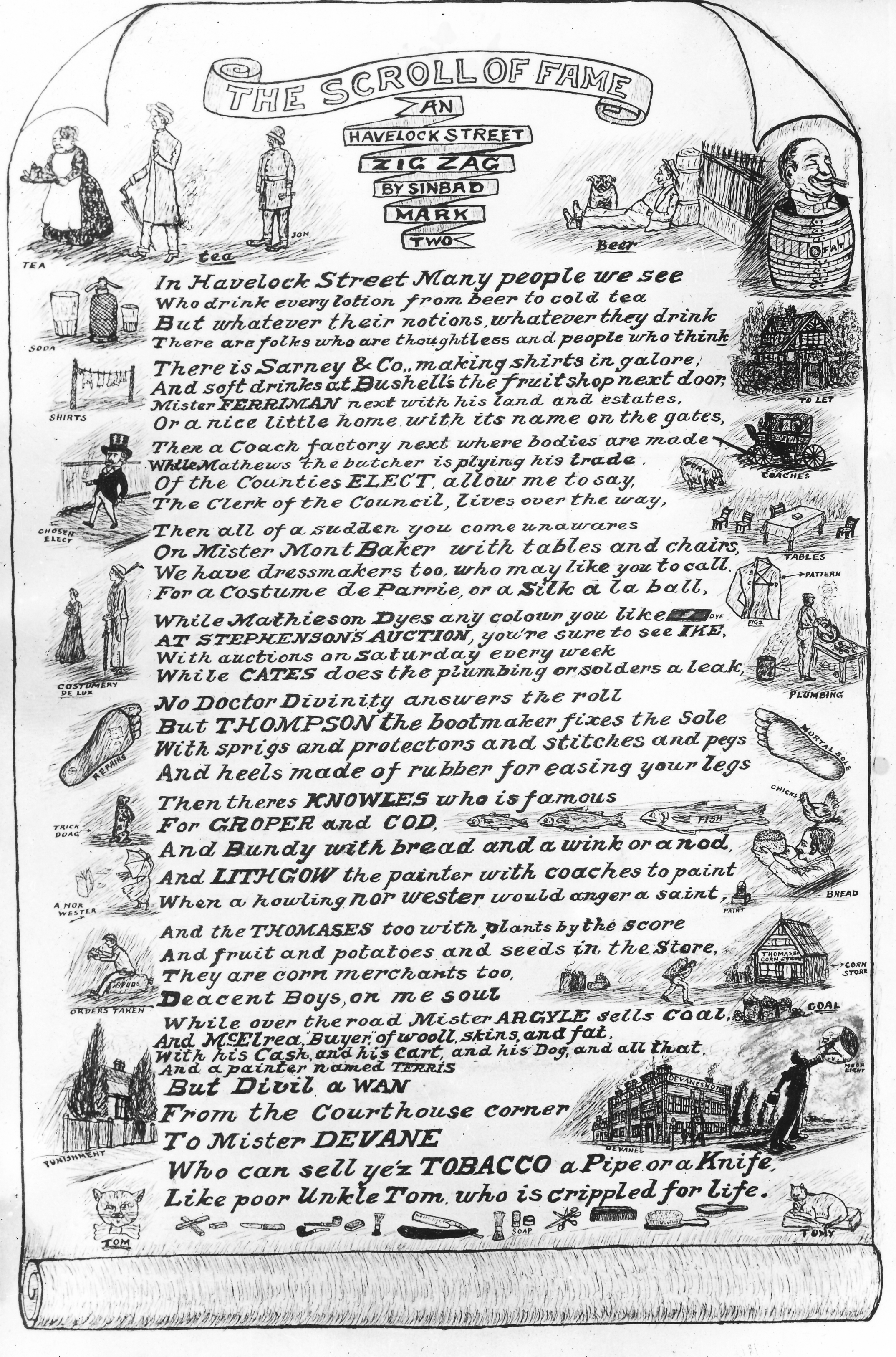 Burnett Street has long been a busy and important part of Ashburton's CBD. Historic photographs of the street tell us a tale of bustling shops, curbs lined with bicycles and social gatherings. 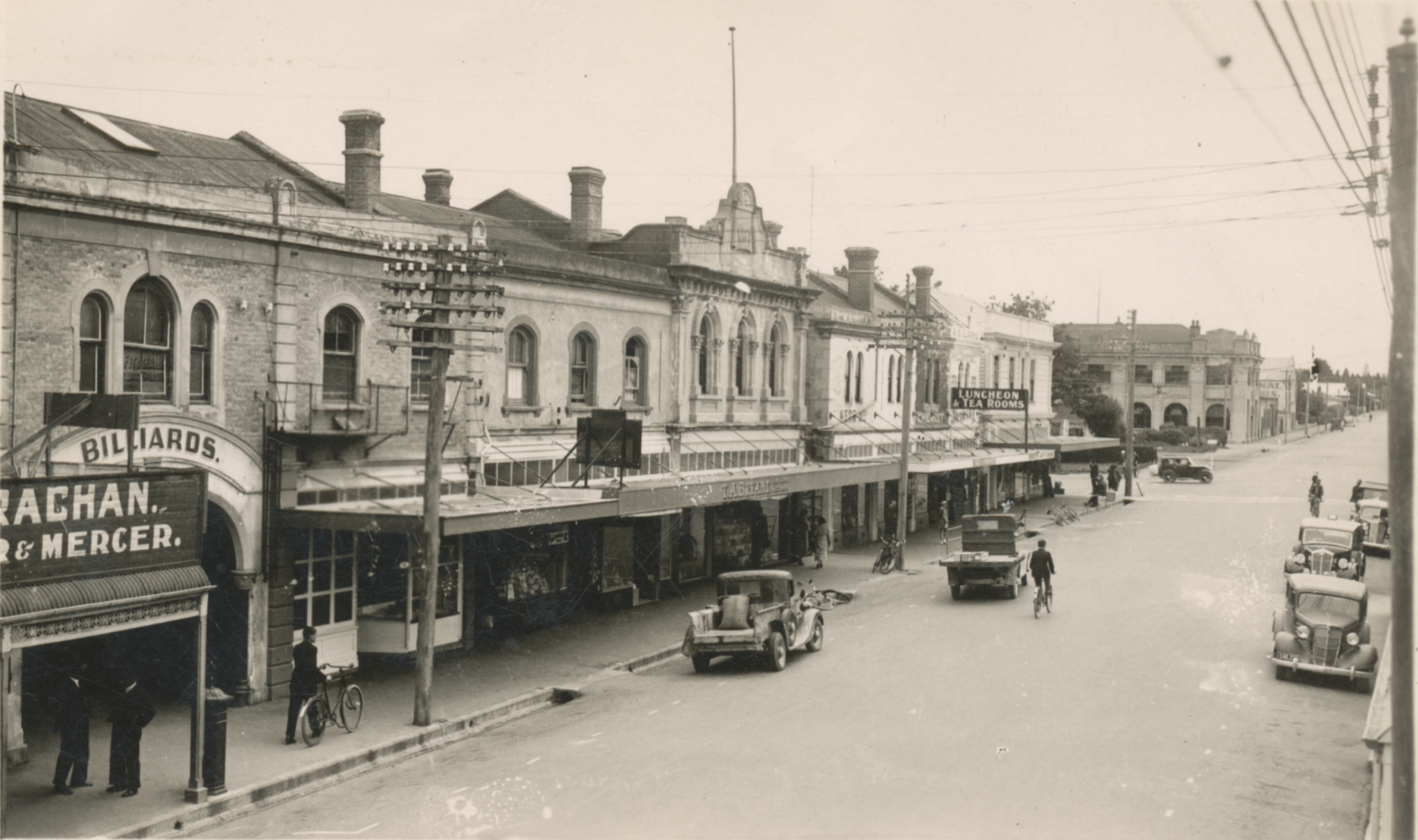 The Ashburton Mail was established in 1877 by Joseph Ivess, a well-known and industrious newspaper publisher who gazetted roughly 40 papers nationwide. The following year, a rival paper called the Evening Echo hit the scene, owned by Charles Dixon and Horace weeks. The Echo was later renamed to the Herald. In a bid to help his chances of becoming Mayor of Ashburton, Ivess started another paper called the Evening News in 1879.

Dixon and Weeks sought to oppose Ivess' ambitious efforts, and so they founded the Ashburton Guardian. Ivess lost the local election, although it is not clear whether the Guardian caused this.

Four newspapers were too many for a town of Ashburton's size, and so in 1880 the Herald merged with the Guardian following a decision by the two papers' owners, Edward George Wright and Hugo Friedlander. William Jules Steward, a politician and well-known paper owner, acquired the Mail in 1884. The next year, he bought the Guardian.

Steward found it hard to balance his political career and managing the paper, and so he leased his papers to Henry Willis in the 1890s and eventually sold them to Robert Bell in 1900. Bell managed several other papers throughout his career including the Mail and Guardian. The Mail closed in 1932, and the Guardian lived on and has been owned by the Bell family ever since. 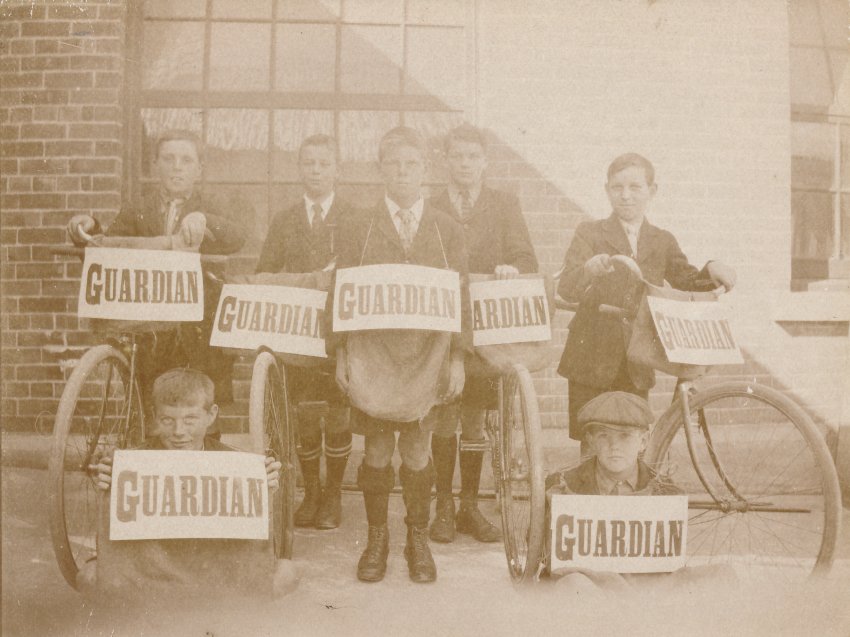 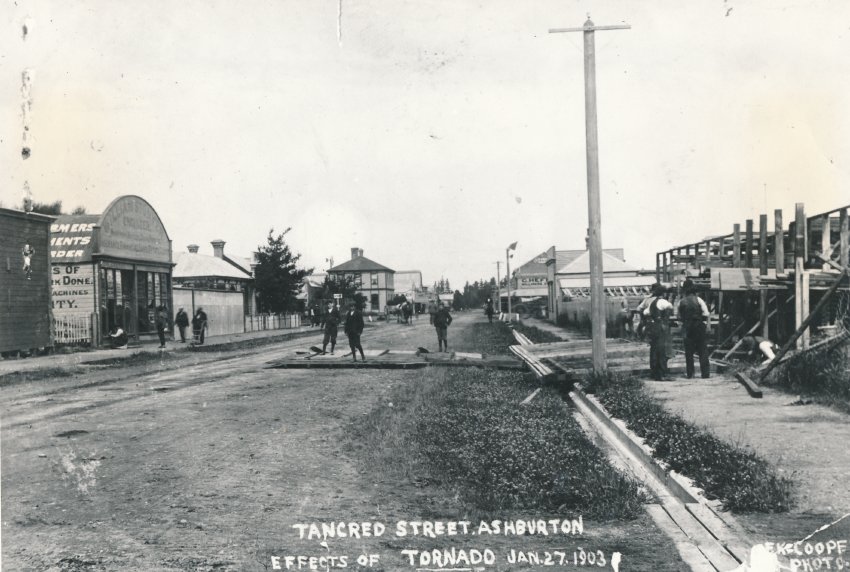 In 1903, a destructive tornado hit Ashburton and caused varying degrees of damage across town including Tancred Street.

According to an Ashburton Guardian report from the time, a great rumbling noise started in the afternoon which originated from the south-west. Rubbish and debris began to fly through the air as the volume of the noise reached a deafening level, and pretty soon the cause was made clear: a tornado!

It tracked straight through town, allegedly carrying "everything before it." Buildings all across central Ashburton were damaged, some more than others. The western side of the Farmer's Cooperative store was shattered by the force of the tornado, and the building was left leaning on a thirty degree angle. One wool store, the Borough Council grounds and countless other properties were affected.

Robert Clark of Tancred Street had a very narrow escape; as he was sheltering in his workshop, a piece of wood came crashing through the roof and practically speared the ground right before his feet. The Guardian wrote, "luckily Mr Clark escaped any personal injury, although he was naturally much alarmed at the time."

The aftermath of this rare natural disaster can be seen in the above photo, which shows the people of Tancred Street inspecting the damage.

Moore Street was home to the first Road Board

In the very early days of Ashburton,  a meeting was called at William Turton's accommodation house on February 2, 1864 to form a public body. The Ashburton Road Board was formed, who were in charge of an area bounded by the Rakaia River, the Rangitata, and from the hills to the sea. It was in this moment that an early predecessor of the Ashburton District was born.

The inaugural members of the board were Benjamin Moorhouse, C Percy Cox, Robert Park, Edward Chapman and Alexander Lean.

New Zealand's early road boards were responsible for the development and upkeep of town and rural infrastructure, particularly roading. At first, the board did not have a purpose-built meeting place. The members used several venues for their meetings in the early 1870s including Anthony Thompson's accommodation house, Westerfield Estate and Turton's again. By 1873 the Ashburton Road Board had built its own offices on Moore Street, which were designed by Cox, the board's designated engineer. 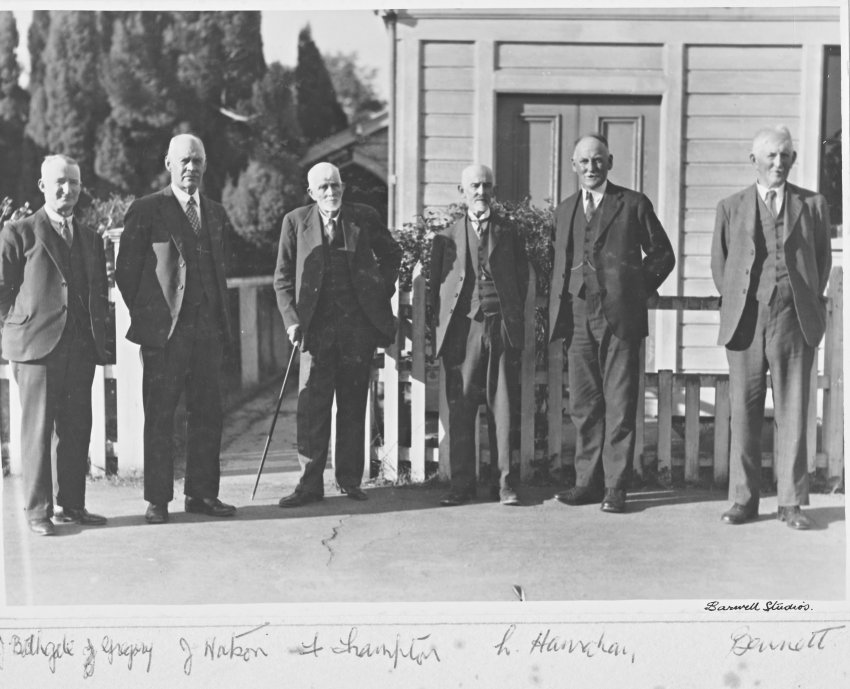