​​On Monday, 4 November 2019, the Ashburton District Council began a significant project that will future-proof important infrastructure for Ashburton's continued growth.​

​What is the project?

Through our contractor, Seipp Construction, the Council are installing a larger wastewater pipe under the Ashburton River to replace the current pipeline. This will connect with a new pump station to be built next to the wastewater treatment plant located at the end of Wilkins Road, Tinwald.
The Ashburton River Crossing & Pump Station project is significant, costing $7 million.
It is being carried out over 14 months, starting on 4 November 2019 and finishing in December 2020.
​​​What has happened so far?

​​​Work to install the new wastewater pipeline under the Ashburton River is on track, with pipe laying well underway. The new 1m diametre pipe is being installed several metres under the ground. Seipp, the Council's contractors, are excavating the trench towards the river using sheet piles to hold the ground around the trench and to maintain the water table.

Sections of the pipe are then laid and the trench filled before more trench is dug.

​The Ashburton River is an important natural feature supporting a diverse ecosystem. The Council has ensured a number of safeguards and procedures are in place to look after the welfare of the river during construction.

The Council is working closely with Te Rūnanga o Arowhenua and Environment Canterbury on this project to ensure the systems and processes in place protect the Ashburton River.

​Construction work and site access for this project affects both the Ashburton/Hakatere River Trail and Ashburton - Lake Hood River Trail. We understand the importance of these facilities to the community and have worked hard to minimise any disruption to them.​

We are pleased to report that the Ashburton/Hakatere River Trail (northern side of the River) will remain open throughout the project, however parts of this trail will be temporarily closed. We anticipate that these closures will be very minor and will be restricted to a matter of minutes over one or two days as trees are felled.

A section of the Ashburton - Lake Hood Trail (southern side of the River) has had to be closed during the project and an alternate route is in place. Trail users traveling to or from Lake Hood are directed to use Grahams Road and Grove Farm Road to connect onto the trail. The trail between Boundary Road and Grove Farm Road is closed, however the trail from the Ashburton River end of the lake to Boundary Road is open and you are able to use this part of the track as far up as Boundary Road.

Appropriate signage detailing these detours and additional information is signposted throughout both River Trails at various access points. A map is pictured below: 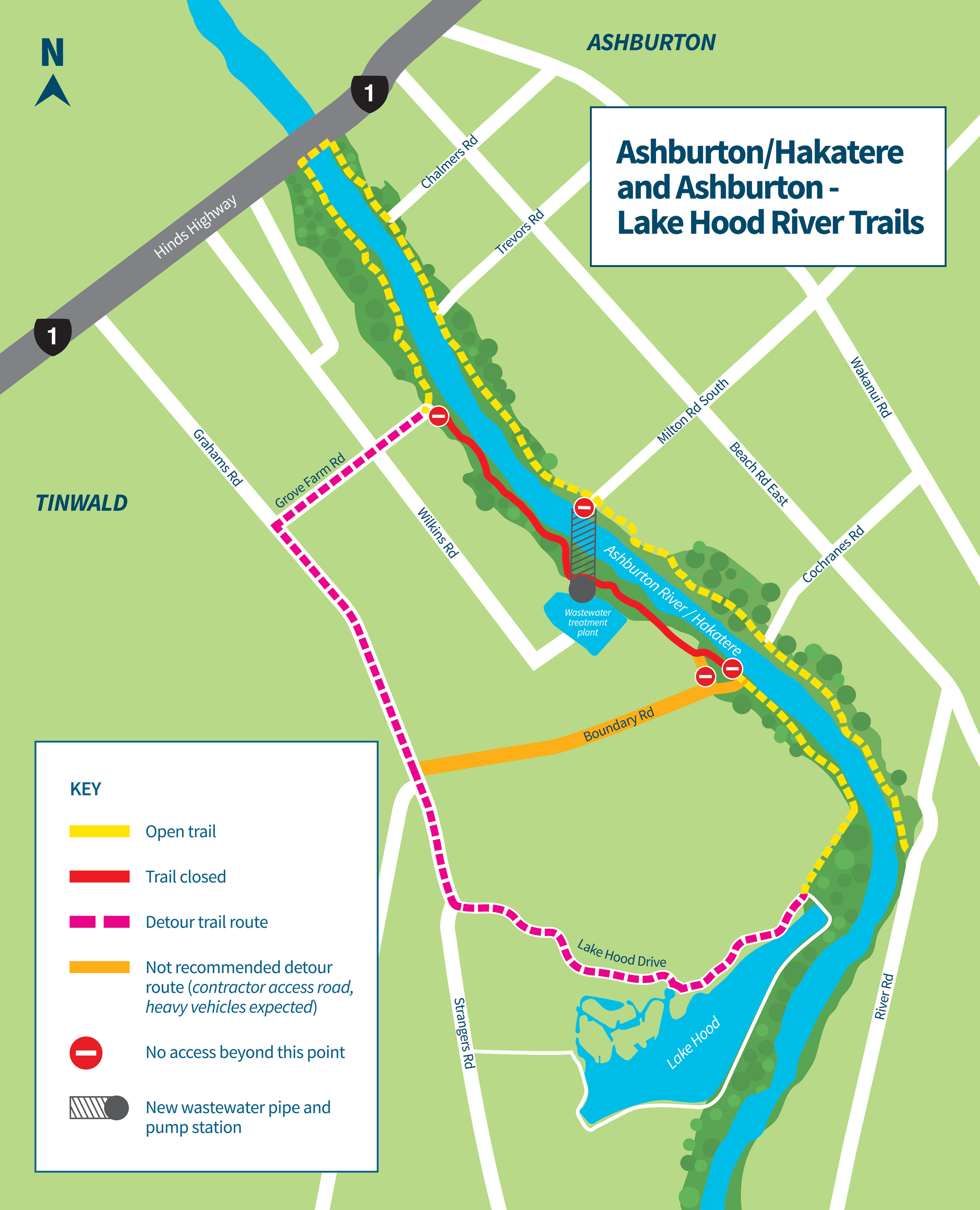 No other roads are closed or restricted.

​Boundary Road and Milton Road South are the main access roads for the contractor, Seipp Construction. An increase in heavy vehicle traffic on these roads in the projects initial set-up phase is expected.​

If you would like to receive updates on the Ashburton River & Pump Station project, sign up to our free e-newsletter at ashburtondc.govt.nz/stayinformed​.​

Major infrastructure upgrade about to start in Ashburton​ ​- Friday, 27 September 2019​​​